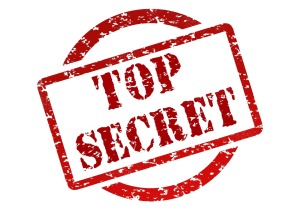 In early 2011, the public radio show This American Life created an international media frenzy when it revealed what it believed to be the original recipe for Coca-Cola.

The “secret formula” for Coca-Cola — which has been locked away in a bank vault at the Trust Company Bank in Atlanta since at least 1925 — is one of the most famous and highly guarded trade secrets in the world.  Supposedly, only two company executives know the recipe at any one time and they are never allowed to fly on an airplane together in case of a crash.  (For more on the rumors and lore surrounding Coke’s secret formula, visit urban myth-busing website Snopes.com.) So, after 125 years of secrecy, how did a public radio show get hold of such a well-protected and highly-coveted corporate gem?  Did This American Life break into the vault or kidnap and tickle-torture one of the two executives until he talked?  No.  They opened a newspaper.  Apparently, the photo used to illustrate the story published in The Atlanta Journal and Constitution on February 18, 1979, was a hand-written copy of (Coke’s inventor) John Pemberton’s recipe circa 1886.  Talk about adding insult to injury!

This American Life has clarified its position on the recipe printed in the paper, stating that it believes the recipe is Pemberton’s original recipe or a version of Coca-Cola that he made either before or after the product hit the market in 1886, and not the recipe used today.  Perhaps this is because they tested the recipe and determined that it wasn’t quite the same as the Coca-Cola we know today, and, of course, The Coca-Cola Company denies that the secret is out.

Although you may not go to quite the lengths taken by The Coca-Cola Company to protect your trade secrets, you should consider what measures (if any) you are taking to safeguard your “information, including a formula, pattern, compilation, program, device, method, technique or process that: (i) derives independent economic value, actual or potential, from not being generally known to, and not being readily ascertainable by proper means by other persons who can obtain economic value from its disclosure or use, and (ii) is the subject of efforts that are reasonable under the circumstances to maintain its secrecy.” (Definition from Uniform Trade Secrets Act.)

Trade secrets — which often include recipes, sales methods, distribution methods, consumer profiles, advertising strategies, lists of suppliers and clients, and manufacturing processes — provide an enterprise a competitive edge and can last for as long as they are kept secret.  So, you would never want to include your trade secrets in a copyright or patent application, as they will be disclosed once the application or registration is published.